A method already present in Ancient Egypt, the plissé was revolutionized and consecrated as a synonym of elegance, luxury and sensuality by Mariano Fortuny in the early 1900s. Here are some of the mysteries of Fortuny’s plissé.

The plissé is one of the most fascinating mysteries in the history of fashion and it is not difficult to understand why: the pleat, by its very definition, allows freedom and elasticity to the fabric and to the wearer. And the plissé, obtained with a long manual process in which the fabric is folded back on itself, has always had an elegant and sensual allure.

From Ancient Egypt to the early 1900s

The first known cases of this method are found in Ancient Egypt where the upper class clothes were made of pleated linen. 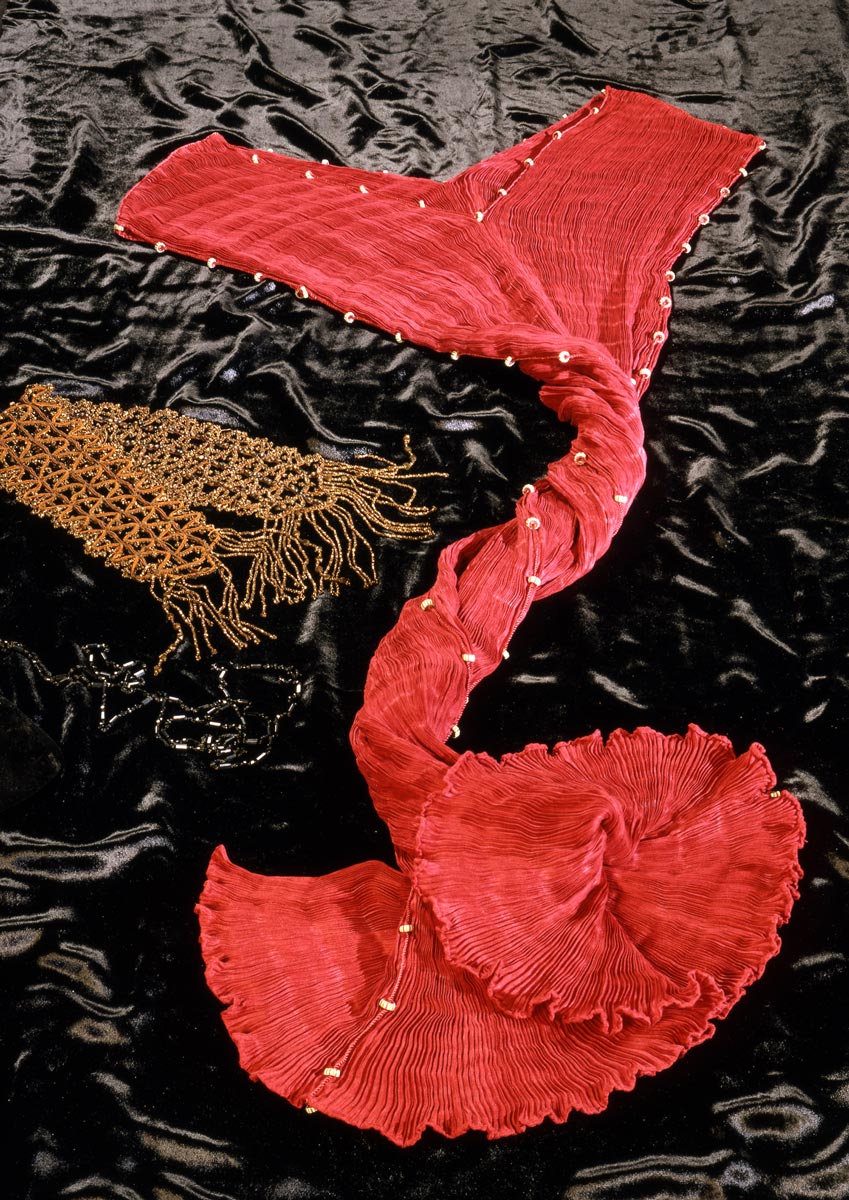 Although the technique with which the pleats were obtained is not known, it is certain that it was a long and meticulous manual work, as meticolous as the process with which the kings collars were made in the sixteenth century. From here a 300 years time jump to get to the Fortuny plissé, used for the creation of scarves, tunics and the iconic Delphos dress. Mariano Fortuny filed his patent in 1909, definitively innovating this technique, but even today some details of the processing remain mysterious.

The most significant revolution introduced by Mariano Fortuny and his wife Henriette consists in fact in the irregularity and quantity of folds which, imitating the Greek statues, adhere perfectly to the female body and show its natural shape.  Beside that is the extraordinary resistance of the pleats for first time in the history of pleating, as evidenced by Delphos gowns, over 60 years old, still maintaining the same shapes as when they were made.

This is also due to the care instructions of the garments which were meant to be stored by rolling them lengthwise, twisting them into a ball, thus preserving the pleats and keeping the shape of the dress, a very important feature that makes the Delphos dress the ideal elegant dress to pack!

Fortuny’s techniques are “simple”, but undoubtedly effective. Many conjectures have been made regarding this process, still partly mysterious, what is certain is the extraordinary dexterity required to obtain the effect we all know thanks to the Delphos.

The pleats, which are all different from each other and irregular, were put into shape when the fabric was wet or perhaps right under a jet of water. The fabric was then heated to fix the folds. During this phase it is possible that the folds were even temporarily fixed by passing a thread through small groups, holding them tightly together for some time.

The Fortuny plissé patent also includes the horizontal waving of the material, once pleated. To be able to do this, in fact, Mariano Fortuny had designed a system that involved the use of heated horizontal pipes.

The coloring techniques and the different shades available were also innovative: the silk was dipped many times to enrich the color more and more starting from a neautral base, so that it changed tone according to the light and the movement of the fabric.

Today in the Fortuny workshops the plissé is still made manually. No technology or “trick”: the experience and knowledge of a tradition that has consolidated over the years and has fascinated the whole world, consecrating it to eternity, is still applied. As stated in the file of the Metropolitan Museum in New York “the Delphos dress exemplifies Fortuny’s ability to transform something historical into a totally modern garment”.