Peggy’s Venetian neighbours referred to Peggy as “La principessa” or “L’ultima Dogaressa”.  She was chic, stylist, sophisticated, and, although various troubles and tragic events, she seemed to move effortlessly and lively through her life.

Peggy Guggenheim was never afraid of making a statement in her life, work and private, as in her choice of accessories and clothing, plenty is to be said for the impact of wearing statement: she was often wearing her Mariano Fortuny’s Delphos gown, it’s said to have been a favourite garment  of hers. She loved the classical modernist style that gave women freedom of expression. 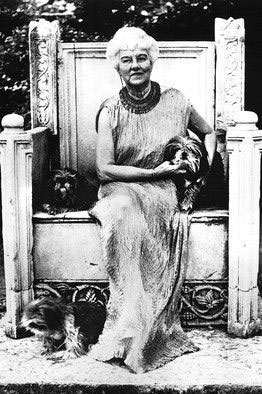 After growing up and  graduating in New York Peggy travelled to Europe in 1921, Paris at that time was the city for parties and romance, there, through her first husband, Laurence Vail, a Dada artist and writer, she became acquainted with many of the leading figures of the avant-garde in Paris and London, including Marcel Duchamp.  She started her career as art patron at 39, opening her first gallery in London, the Guggenheim Jeune, in January 1938. She had “the idea of opening a modern museum in London,” with the British art historian Herbert Read as its director, a place where showcasing contemporary art,” the art of the day”,  as her friend Samuel Beckett once suggested.

Returned in Paris, after abandoning the project of the London Museum, she purchased many masterpieces during the turbulent times of the war. Artists and dealers, fearing the German invasion, were delighted to sell everything they had before moving to safest areas. She had a list, compiled by experts, of artists that should be included in a first-class selection of Modern Art and she managed brilliantly to buy a painting or a sculpture from every single one of them. In 1941 she moved back to New York, followed by Max Ernst soon to become her second husband.

“Art of the Century”, Peggy Guggenheim Gallery/Museum in Manhattan, was opened in October 1942, designed by the Austrian Architect Frederick Kiesler, it was the place where American Art came into its own, challenging the traditional way to exhibit art.

Despite the success of her New York gallery, Peggy decided she wanted to return to Europe and chose Venice to start a new life bringing along her international collection.

In 1948 Peggy was invited toshowcase the collection in her own private pavilion in the Venice Biennale. The defining event of the Venice Biennale was the most comprehensive survey of abstract and surrealist art ever seen in Italy up to that day, and the American artists, such as Jackson Pollock and Mark Rothko, were being exhibit internationally for the very first time. Peggy Guggenheim collection introduced European Art Lovers to the New York School of Painters who would dominate the Art scenes in the 50s.

It is shortly after the Biennale that Peggy fell in love with an 18th Century unfinished Palazzo on the Grand Canal, the Palazzo Venier dei Leoni, that she decided to buy it and make it into her home for the rest of her life.

Peggy Guggenheim devoted her life and her fortune to collecting and advancing the cause of Modern Art and she succeeded in giving to all of us a superb collection in a superb museum. The Guggenheim Collection is, without doubt, one of the sights to see in Venice, the single white storey building stands in the striking contrast to its more ornate 15th and 16th century surroundings along the Grand Canal. The once home and private palazzo of Peggy Guggenheim, today is part of the Guggenheims constellation of Museums around the world. On its walls hang some of the 20th century most important art, Kandinsky, Pollock, Rothko. Miró, Magritte, Picasso. The Museum remains, above all, one of the unique achievements of a legendary individual, of a legendary instinct and vision.